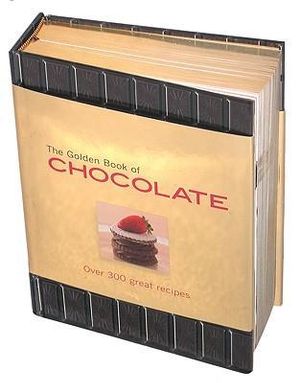 booktopia The Golden Book of Chocolate

This book might easily be the most lavish, the most complete, and most beautiful book ever published on the subject of that most sensuous of all foodsA a�achocolate. Filled with history, anecdotes, and recipes, and featuring hundreds of lavish full-color photos, "The Golden Book of Chocolate " is literally a chocolate loverA a�a s dream come true. A fascinating detailed account chronicles chocolateA a�a s origins among the Aztecs of ancient Mexico, its importation to Europe, and the development of the modern chocolate industry as we know it today. But recipes are at the heart of this book. Separate chapters are devoted to chocolateA a�a s central role in easy-to-follow recipes for: A a�A Cookies A a�A Bars and Brownies A a�A Muffins and Cupcakes A a�A Pastries A a�A Elegant Desserts A a�A Pies and Tarts A a�A Puddings and Creams A a�A Tea and Coffee Cakes A a�A Layer Cakes A a�A Candy A a�A Savory Dishes A a�A Drinks A a�A Basic Recipes Each recipe includes a list of ingredients, step-by-step instructions, and a large, full-color photo of the finished item. The bookA a�a s final A a�ABasic RecipesA a�A chapter shows how to prepare chocolate ingredients that go into the making of other chocolate-based delicacies. They include chocolate pastry cream, chocolate custard, chocolate sauce, and several other sumptuous ingredients. This beautiful book is embellished with a ribbon place marker bound into the spine and features golden-tipped page edges. (sidebar) A Capsule History of Chocolate Among the Aztecs the drinking of chocolate was confined to the royal house, the lords, and the nobility. A report by Spanish conquistador Bernial Diaz del Castillo noted that Montezuma drank chocolate several times a day from beakers made of pure gold. The Spanish brought chocolate to Europe in the late 1500s, and by the 1660s it was a favorite drink of Renaissance Italian noblemen. In the 1800s it became a popular drink among the literary figures who gathered in LondonA a�a s coffee houses, and in the nineteenth century the worldA a�a s first chocolate candy was produced in the city of Bristol, England .